Scientific name: Labrus bergylta
The largest of the UK wrasse species, the ballan wrasse with its striking patterning is a delight for any rocky reef snorkeller or shallow water diver!

Thought to be common, although wild wrasse are caught around the UK in large numbers for deployment as lice cleaners in Scottish salmon farms

April-October. They often hide in rocky crevices over winter.

The largest of the UK wrasse species, ballan wrasse have incredibly strong teeth which they use to pull molluscs and barnacles off the rocks, before extra teeth in their throats crush shells and finish the job. You will sometimes see this large fish surrounded by smaller rock cooks, who clean its parasites.

These heavy-bodied fish reach a maximum length of 60cm.
Colouration and patterning are extremely variable in adults, ranging from mottled greens, browns and oranges to saddle-type markings. Juveniles are usually a bright emerald green colour throughout the body. Long, jagged, upright dorsal fin extends down towards the tail.

Common around all British and Irish coasts.

All ballan wrasse start off life as females, but some become males later on in life! 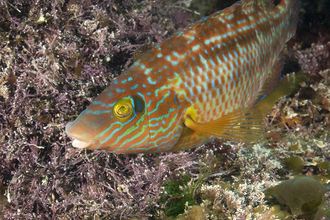 One of the most striking and beautiful reef species found in the UK! 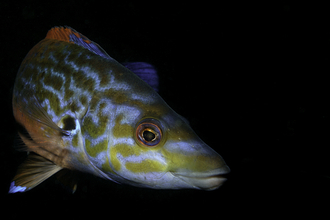 One of the most colourful fish in UK seas, the cuckoo wrasse looks like it belongs in the tropics. Don't be fooled though, it'…