Scientific name: Arvicola amphibius
The water vole is under serious threat from habitat loss and predation by the non-native American mink. Found along our waterways, it is similar-looking to the brown rat, but with a blunt nose, small ears and furry tail.

The water vole lives along rivers, streams and ditches, around ponds and lakes, and in marshes, reedbeds and areas of wet moorland. Look out for the signs of water voles, such as burrows in the riverbank, often with a nibbled 'lawn' of grass around the entrance.

Water voles like to sit and eat in the same place, so piles of nibbled grass and stems may be found by the water's edge, showing a distinctive 45 degree, angled-cut at the ends. 'Latrines' of rounded, cigar-shaped droppings may also be spotted. Water voles start to breed in spring, having three to four litters a year of up to five young.

The water vole has chestnut-brown fur, a blunt, rounded nose, small ears, and a furry tail. It is much bigger than other vole species. Scotland’s water voles often appear darker, with many having a black coat.
The similar brown rat is larger, with grey-brown fur, a pointed nose, large ears that protrude from its fur, and a long, scaly tail.

Widespread, but absent from the Channel Islands, Isles of Scilly, Scottish islands, Northern Ireland and the Isle of Man.

The water vole is famously known as 'Ratty' in Kenneth Grahame's classic children's tale, The Wind in the Willows. Despite being sometimes referred to as a 'Water Rat', there is no such thing - there are brown rats, black rats and water voles. 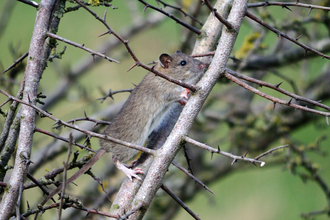 The brown rat has a bad reputation, but it mostly lives side-by-side with us without any problems. It can be seen in any habitat. 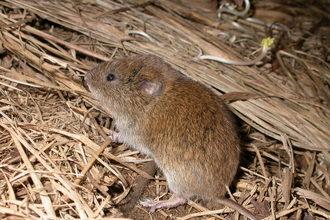 With a population of 75 million, the field vole is one of the UK's most common mammals. Hidden among the vegetation of grassland,… 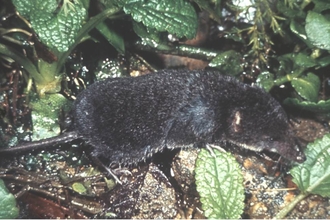 The large, dark grey water shrew lives mostly in wetland habitats where it hunts for aquatic insects and burrows into the banks. As a…

Help us bring water voles back