Scientific name: Trichoptera
Caddisflies are a large order of insects that can be found in all kinds of wetlands. The larvae are known for making cases to pupate in, gathering stones, sand and leaves, and wrapping them with silk.

Adults from February to November

There are almost 200 species of caddisfly (order Trichoptera, also known as 'sedge flies') in the UK, the largest of which is more than 3cm long. Adults are moth-like insects with hairy wings. The most common caddisflies, particularly in garden ponds, are the Cinnamon Sedges - a group of around 30 species.

Caddisfly larvae live underwater, where they make cases by spinning together stones, sand, leaves and twigs with a silk they secrete from glands around the mouth. Most larvae live in these shelters, which can either be fixed or transportable, though a few species are free-swimming and only construct shelters when they’re ready to pupate.

Adults are often attracted to moth traps, or can be found during the day on vegetation near to the water's edge, or flying in swarms over the water. Caddisflies are an important food source for all kinds of predators, including Atlantic Salmon and Brown Trout, and birds such as the Dipper.

Adult caddisflies resemble moths, but with their wings folded back along the body. Unlike moths, they have a fine set of hairs on their wings instead of scales. Some species have very long antennae. Individual species can be difficult to identify.

Caddisfly larvae are more readily identified, with many having distinctive cases. For example, some form rounded, humped cases from coarse sand, whilst others build lumpy cases from cut pieces of plant.

One species of caddis fly, Enoicyla pusilla, differs from all the others by having a larva that lives, not under the water, but among leaf litter in woods in the West Midlands. This gives it its common name, the 'land caddis'.

The Wildlife Trusts manage many wetland nature reserves for the benefit of the wildlife they support. You can help by supporting your local Trust and becoming a member; you'll find out about exciting wildlife news, events on your doorstep and volunteering opportunities, and will be helping local wildlife along the way. 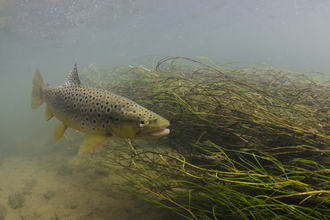 A fierce predator of small fish and flying insects, the brown trout is widespread in our freshwater rivers. It is has a golden body,…