Scientific name: Clibanarius erythropus
This stunning hermit crab has only returned to our southern shores in recent years. Let us hope it stays for good this time!

Rare in the UK.

This species has only relatively recently made a comeback to the UK after disappearing from our shore in the late 1980s. St Piran’s will often use a variety of empty sea snail shells to make their home, including flat periwinkle, dog whelk and sting winkle. They are much shyer than the common hermit crab and will often hunker down inside their shell until all danger has disappeared.

Red eye stalks with striking black and white eyes. Claws are equally sized, unlike other hermit crabs, with black tips. Claws and legs have blotches of red and electric blue.

Warm water species, currently only recorded on the south west coast of England, more common further south and in Europe.

In 2016, BBC Springwatch ran a competition to give this species a common name, with the chosen winning name being ‘St Piran’ - the Patron Saint of Cornwall, who was a hermit and who survived being thrown into the sea!

Always follow the Seashore Code when rockpooling, be careful to leave everything as you found it - replace any rocks you turn over, put back any crabs or fish and ensure not to scrape anything off its rocky home. If you want to learn more about our rockpool life, Wildlife Trusts around the UK run rockpool safaris and offer Shoresearch training - teaching you to survey your local rocky shore. 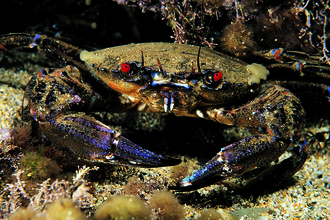 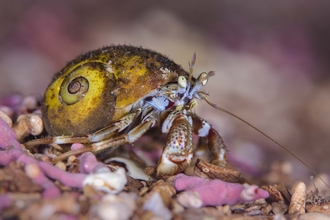 If you spot a crawling shell next time you're at the seaside, take a closer look… it might be a hermit crab! 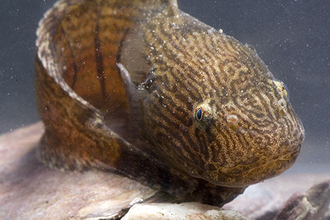 Although, commonly referred to as a ‘sea snail,’ this species in fact belongs to the fish family!