Scientific name: Typhaeus typhoeus
Named for its three bull-like horns, the minotaur beetle is a large dung beetle found on grassland and heathland. Adults drag dung back to their nests for their larvae to feed on.

Length: up to 2cm

The minotaur beetle is a large, round dung beetle found on sandy grassland and heathland, where it feeds on rabbit droppings and other dung, often at night. Adults emerge in autumn, but still need to mature in order to breed, so undergo an intense feeding period. If the weather is mild, they may start breeding in early winter.

They nest in tunnels that can be up to 1.5 metres deep, where they lay their eggs and provide dung for the larvae to feed on; they drag the dung back to their nest using their strong front legs. The males use their 'horns' to defend the nest. By the following summer, their cycle is completed and the adults will die to make way for the next generation.

The minotaur beetle is glossy black, with ridges running down the wing cases. Males are unmistakeable, sporting three 'horns' (two long horns and one short one in the centre) on their thorax. Females lack the horns but have pointed edges on the front corners of their pronotum (the plate-like structure that covers the thorax).

Widespread, but scarce, in England and Wales.

The minotaur beetle is one of a number of dung beetles in the UK that bury balls of dung for their larvae to feed on. These beetles provide a vital nutrient-recycling service for our habitats. 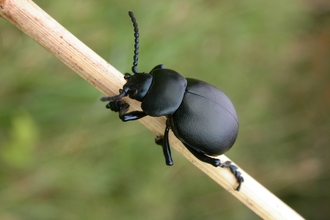 The common name of the Bloody-nosed beetle derives from its unusual defence mechanism: when threatened, it secretes a distasteful blood-… 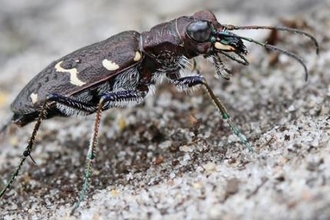 Find out where you can see Britain's biggest tiger beetle. Watch a larva waiting to ambush, or an adult speeding off after its prey… 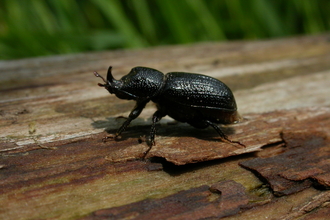 The rhinoceros beetle lives up to its name by sporting a distinctive 'horn' on the males' head. This glossy, blue-black…

Many species of beetle can be found in gardens. We've got some great gardening tips to help them feel more at home.