Scientific name: Harmonia axyridis
A non-native species originating from Asia, the harlequin ladybird is prevalent in towns and gardens.

Originally from Asia, the harlequin ladybird first arrived in the UK in 2004, and has rapidly become one of the most common ladybirds in the country, particularly in towns and gardens. It is one of our larger species and is a voracious predator - it is able to out-compete our native species for aphid-prey and will also eat other ladybirds' eggs and larvae. It can have multiple broods throughout the spring, summer and autumn, which also gives it a competitive edge.

Harlequin ladybirds are extremely variable, with up to 19 black spots on a red or orange background. There is a melanic form, with two or more red spots on a black background. The head has an obvious white triangle in the centre, something that neither of the other two similarly sized species have.

Widespread in England and Wales and spreading into Scotland.

In North America, the harlequin ladybird is sometimes known as the 'Halloween bug' because it gathers together in enormous numbers during the late autumn, sometimes invading people's homes. This Asian ladybird was introduced into North America to control aphids, but has spread so successfully over the past 25 years that it is now the commonest ladybird there and is seriously threatening endemic species of ladybird. 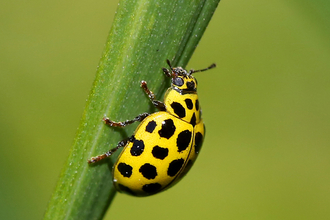 The 22-spot ladybird is one of three yellow ladybirds in the UK. Look for it in grassland, woodland and gardens. Ladybirds are… 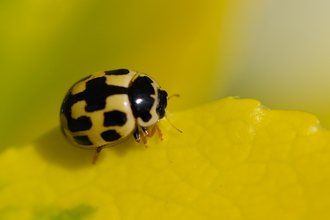 The 14-spot ladybird is one of three yellow ladybirds in the UK. Look for it in grassland, woodland and gardens. Ladybirds are… 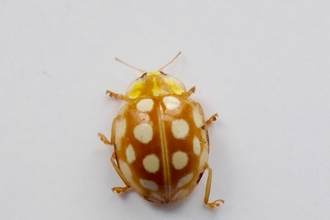 The orange ladybird is pale orange with up to 16 cream spots on its wing cases. It feeds on mildew on trees like sycamore and ash, and…