Scientific name: Staphylinus olens
A ferocious and fast predator, the Devil's coach horse beetle hunts invertebrates after dark in gardens and on grasslands. It is well-known for curling up its abdomen like the tail of a scorpion when defending itself.

The Devil's coach horse is a common beetle of gardens, and can often be found under stones and in compost heaps. It is also common along hedgerows and in grassland. Devil's coach horses are voracious predators, emerging after dark to prey on other invertebrates, and using their pincer-like jaws to crush them. They are fast-moving, preferring to run along the ground rather than fly. They are well-known for curling up their abdomens like the tail of a scorpion when threatened, and emitting a foul-smelling substance from their abdomens. Beware - they can also deliver a painful bite to us! Females lay their eggs in soil; the predatory larvae hatch and spend the winter as pupae, emerging the following spring as adults.

The Devil's coach horse is an all-black, medium-sized beetle, with large jaws and a tail that it holds cocked in a characteristic, scorpion-like position.

The Devil's coach horse is a member of the rove beetle family, of which there are more than 1,000 species in the UK. Rove beetles are one of the most diverse families of animals on the planet: there are at least 46,000 species described so far, and many more still to be discovered. 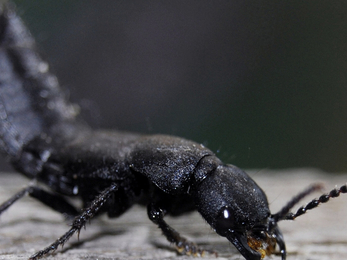 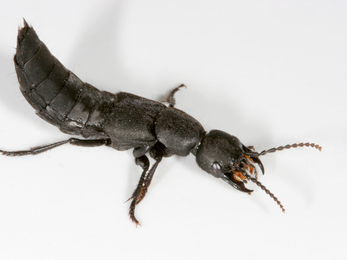 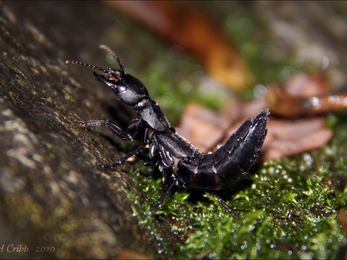 Join for as little as £3 a month

Get monthly newsletters packed with ways that you can help wildlife!

The Coppery click beetle is a large, coppery-purple beetle with straw-brown wing cases. It can be found on grassland and farmland, and…

This large, brown beetle can be seen swarming around streetlights in spring. They live underground as larvae for years and emerge as…