Scientific name: Mergus serrator
The streamlined red-breasted merganser is a handsome bird and a great fisher - its long, serrated bill helps it to catch and hold its slippery fish prey. It is most commonly spotted around the coast in winter.

The red-breasted merganser is a medium-sized duck and a member of a group called the 'sawbills' because of their long, narrow bills with saw-like 'teeth' which are good for gripping fish. A long, streamlined bird, it is perfectly shaped for swimming after fish. red-breasted mergansers are gregarious birds, forming flocks of hundreds in winter.

The red-breasted merganser is a white diving duck. It can be distinguished from the Goosander by its thinner bill, grey sides, reddish-brown breast and crest of green feathers on its head.

Nests on lakes and rivers in the north and west of the UK. A common winter visitor to coastal waters.

The Wildlife Trusts work closely with fishermen, farmers and landowners to ensure that our wildlife is both protected and provides benefits for people. By working together, we can create Living Landscapes: networks of habitats stretching across town and country that allow wildlife to move about freely and people to enjoy nature. Support this greener vision for the future by joining your local Wildlife Trust. 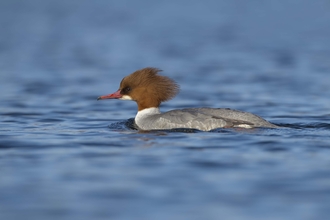 The streamlined goosander is a handsome bird and a great fisher - its long, serrated bill helps it to catch and hold its slippery fish… 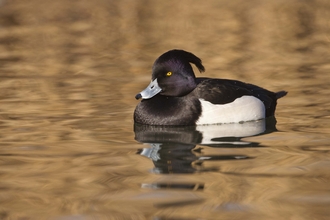 This comical little duck lives up to its name – look out for the black tuft of feathers on its head!

How to identify diving ducks