Scientific name: Falco tinnunculus
The kestrel is a familiar sight hovering over the side of the road, looking out for its favourite food: small mammals like field voles. It prefers open habitats like grassland, farmland and heathland, but can be seen in towns and villages.

Classified in the UK as Amber under the Birds of Conservation Concern 4: the Red List for Birds (2021).

The kestrel is a little smaller than a Feral Pigeon and can be found in all kinds of habitats, from open countryside to towns and villages. They nest in holes in trees, old buildings and abandoned crows' nests, laying between four and five eggs. When they hatch, both parents help to feed the young chicks.

Kestrels are typically seen hovering, their pointed wings held out. Males have a grey head and tail with a prominent black band, a gingery-brown back and a creamy underside which is speckled with black. Females are similar, but with a more uniform brown back and dark bands on the tail.

The familiar behaviour of the kestrel gives it one of its old country names: the 'windhover'. The kestrel has the ability to keep its head still while it hovers - even in strong winds - helping it to pinpoint its prey by sight. 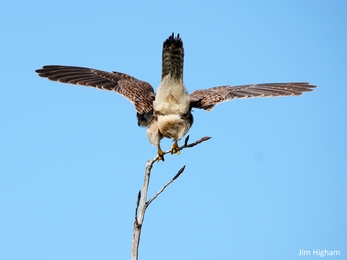 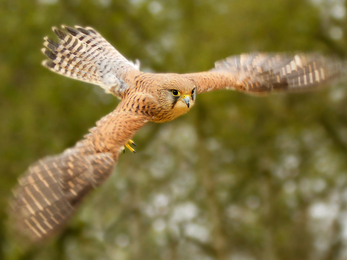 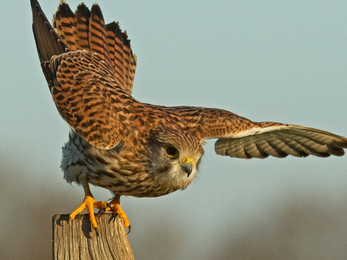 Join for as little as £3 a month

Get monthly newsletters packed with ways that you can help wildlife!