The house that Jack built

The house that Jack built

When I started as a Wildplay Officer 3 years ago I visited Hem Heath Woods for the first time. It is hidden gem in the middle of a city I had worked in for over 10 years and quickly became my favourite place in Stoke-on-Trent. On my first Wildplay session in Hem Heath Woods I can still remember one of the first people arriving, I was nervous about my new role and they were early.

A rosy cheeked 4-year-old boy was hiding behind his Mum, wide eyed and shy because in front of him was stood a stranger. His Mum kindly encouraged him to say hello and listen to me as I explained the activities on offer, he then disappeared back into the woods to build a den, hunt for bugs and at the end left slightly muddier than when he had arrived with a silent wave goodbye.

At the next Wildplay session at Hem Heath Woods the boy came back, eagerly tugging at his Mum’s arm. ‘He hasn’t stopped asking about when he can come back to Wildplay.’

This time he braved a wobble on the slackline gripping tightly to his Mum’s hand. The next time he came he brought a friend along and introduced me to them. With more confidence he showed his friend how to balance on the slackline and the best place to build a den.

To my surprise whilst delivering Wildplay at another park a familiar face turned up, the same rosy cheeked boy smiling and running towards me this time with another friend.

Excited to take part, building bug hotels, following picture trails, creating obstacle courses, any challenge we set he took up with great enthusiasm. ‘We’ve never been to this park before!’ Jack’s Mum exclaimed and then a little later she asked ‘Jack wants to know if you can bring Wildplay to his park?’

So we did and it was really popular. Jack had told all of his friends about Wildplay. He also told his teachers who invited us to come in and deliver Wildplay at his school.

Three years later and Jack and his Mum are still regulars at our Wildplay sessions that happen all across the city, he has joined as a member of Staffordshire Wildlife Trust, has declared himself a Wildplay Ambassador and even sponsored me to run the London Marathon last year with his own pocket money. Happy in the knowledge that his money was supporting the work that we do.

Jack’s Mum has told me that Wildplay has had a huge impact on his life, he is more confident, outgoing, independent, adventurous and has developed a great love of the outdoors and wildlife. So much so that it was stories about wildlife that encouraged him to start reading.

Wildplay has given Jack a lot and he has given in return, in small ways and in big ways. He has not only provided us with opportunities to talk to more people about what we do but has also given back to wildlife.

Last February Jack came to one of our bird box building workshops and took home a bird box to hang up in his garden. Over the spring a family of birds moved in. Jack told me about how he loves watching the birds and is proud that he has been able to provide a place for them to nest. It is my hope that Jack’s passion for wildlife continues to grow and lasts with him through school, jobs, family and retirement.

If we can inspire and educate young people today then we can be safe in the knowledge that we have done the very best we can to protect our wildlife for the future.
Katie Shipley
Staffordshire Wildlife Trust 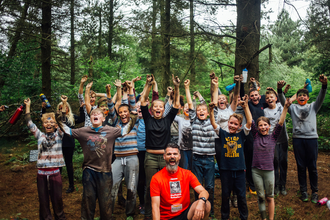 The Wildlife Trusts support and enhance learning in thousands of schools each year. We have accessible and inspiring locations,…

Every Child Wild: Making nature part of growing up - for all children